Holidays in Germany Part I

The 1st of May

Why is May 1st celebrated in parts of Europe? The reason for our holiday is the history of America.

In the era of industrialization in the 19th century, May 1 was in the United States of America the day of the demonstration of the rights of the working class. This day was chosen because of the tradition of moving on the 1st of May and is still known as “the day of moving”. The ambiguity of private change and political fights is still present today. Above all, in Germany the power of the citizens’ movement and the right to work, especially work for everyone under human conditions, are celebrated. 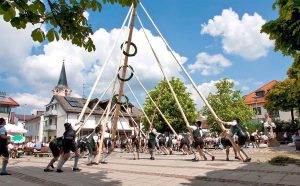 In the suburbs and cities, special trees called “Maibäume” are placed, which are not only a symbol of change, but also a part of the festivities. So it is tradition to steal the May trees of the neighboring cities and celebrate the victory with music, good food and traditional drinks. In some parts of Germany couple dances are also popular around the May trees. Especially in Bavaria, traditional clothes are used for these dances. In Europe the day of work is celebrated not only in Germany – also in Liechtenstein, Austria, Belgium, and in parts of Switzerland, May 1st is something special!

This website uses cookies to improve your experience while you navigate through the website. Out of these, the cookies that are categorized as necessary are stored on your browser as they are essential for the working of basic functionalities of the website. We also use third-party cookies that help us analyze and understand how you use this website. These cookies will be stored in your browser only with your consent. You also have the option to opt-out of these cookies. But opting out of some of these cookies may affect your browsing experience.
Necessary Always Enabled
Necessary cookies are absolutely essential for the website to function properly. This category only includes cookies that ensures basic functionalities and security features of the website. These cookies do not store any personal information.
Non-necessary
Any cookies that may not be particularly necessary for the website to function and is used specifically to collect user personal data via analytics, ads, other embedded contents are termed as non-necessary cookies. It is mandatory to procure user consent prior to running these cookies on your website.
SAVE & ACCEPT
error: Content is protected !!